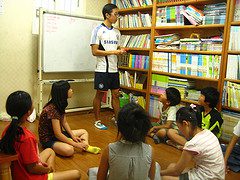 The NYT had a very interesting article back on September 6th, entitled In a New Role, Teachers Move to Run Schools. I didn’t have time to blog about it but wanted to come back to it since it rang a lot of agile bells. The idea is that teachers, rather than principals, make decisions about how to run a school.

From the article, you’re seeing some things in this Newark school that you’d consider unlikely to happen in a more traditionally run school: longer school days, teacher crafted curriculum, teacher budget governance. Self-organization leads to greater motivation and job satisfaction. As one teacher put it, “This is a fantasy. It’s six passionate people who came together and said, ‘Enough is enough.’ We’re just tired of seeing failure.”

There are some skeptical voices. One think tank wonk made the observation that “You’re trying to run an upside-down pyramid in a pyramid structure. There is so much momentum against being completely different in most districts.” Anyone who has tried to practice agile in a hostile corporate culture will attest to that.

There are some major differences in this process. You don’t necessarily get the same feedback loop in teaching that you do in software development. As anyone who has taught will tell you, sometimes the class you thought was doing well will bomb out on a test.

Also, since the schools can be large, they need to elect a governance committee of teachers. That makes each individual teacher less able to influence the workings of the school. And if these committees have to decide who’s hours get cut or who gets laid off when the budget crunch hits, trust and teamwork can break down in a hurry.

Still, I’m eager to see the progress of this agile-like school over the next few years.