Bluetooth 5.0 introduces a number of upgrades in speed, security and range to previous versions of Bluetooth. Yet many consumers still don’t have Bluetooth 5.0 compatible smartphones.  In this article, we take a closer look at Bluetooth 5.0 support across today’s most popular mobile devices (Apple and Android), and offer those in the medical device industry guidance on when it makes sense to support Bluetooth 5.0 for your connected medical devices.

With over eight in 10 adults now owning a smart device, the “internet of everything” (IoE) has become more accessible to both patients and healthcare providers alike. In this new space, wireless connectivity such as Bluetooth is powering the next-generation of IoE technologies — which, among its many use cases, has enabled patients to receive care via their smartphones.

Two versions of Bluetooth are now available for Apple and Android devices: Bluetooth 4.2 and Bluetooth 5.0. Currently, the majority of devices with Bluetooth-connected mobile apps utilize Bluetooth 4.2; however, Bluetooth 5.0 offers several notable improvements over its predecessor and is rapidly gaining market share.

While it’s easy to take a “newer is better” approach in your development strategy, determining which version of Bluetooth to support requires a nuanced understanding of smartphone market share, user preferences, and upcoming smartphone trends: if your support goes too far back, you risk losing key Bluetooth benefits; conversely, developing too far into the future means you risk losing important market share.

In this article, we take a closer look at Bluetooth 5.0 support across today’s most popular mobile devices (Apple and Android), and offer those in the medical device industry guidance on when it makes sense to support Bluetooth 5.0 for your connected medical device(s).

A Brief Recap of Bluetooth 4.2

Launched in December 2014, Bluetooth 4.2 introduced the IPv6 protocol, the most recent version of the Internet Protocol, for direct internet connection.

Version 4.2 supports both Bluetooth Classic and Bluetooth Low Energy (BLE). Bluetooth Classic is used to connect mobile phones to Bluetooth headsets for phone calls and for streaming applications such as audio streaming and file transfers. By contrast, BLE is a low power version of Bluetooth, meant for power sensors and accessories. Like Bluetooth Classic, BLE allows devices to communicate with one another, but is meant for a wider range of internet-enabled devices.

BLE was not meant to replace Bluetooth Classic, but rather, to serve as a way for Bluetooth devices to communicate quickly and easily with connected devices in the ever-growing Internet of Things.

The main benefit of BLE is that, as a low-power technology, it can communicate with nearby devices that must, by design, consume less power. These devices include wearables such as heart rate monitors and fitness devices, which typically must run on batteries for long periods of time and therefore cannot use a lot of energy.

Indeed, the efficient and low-power nature of BLE, not to mention its ubiquity in most smartphones on the market and low-cost BLE modules and chipsets, makes it indispensable for connected medical device applications.

Bluetooth 5.0 offers a number of improvements on Bluetooth 4.2, and in particular, major updates to BLE: 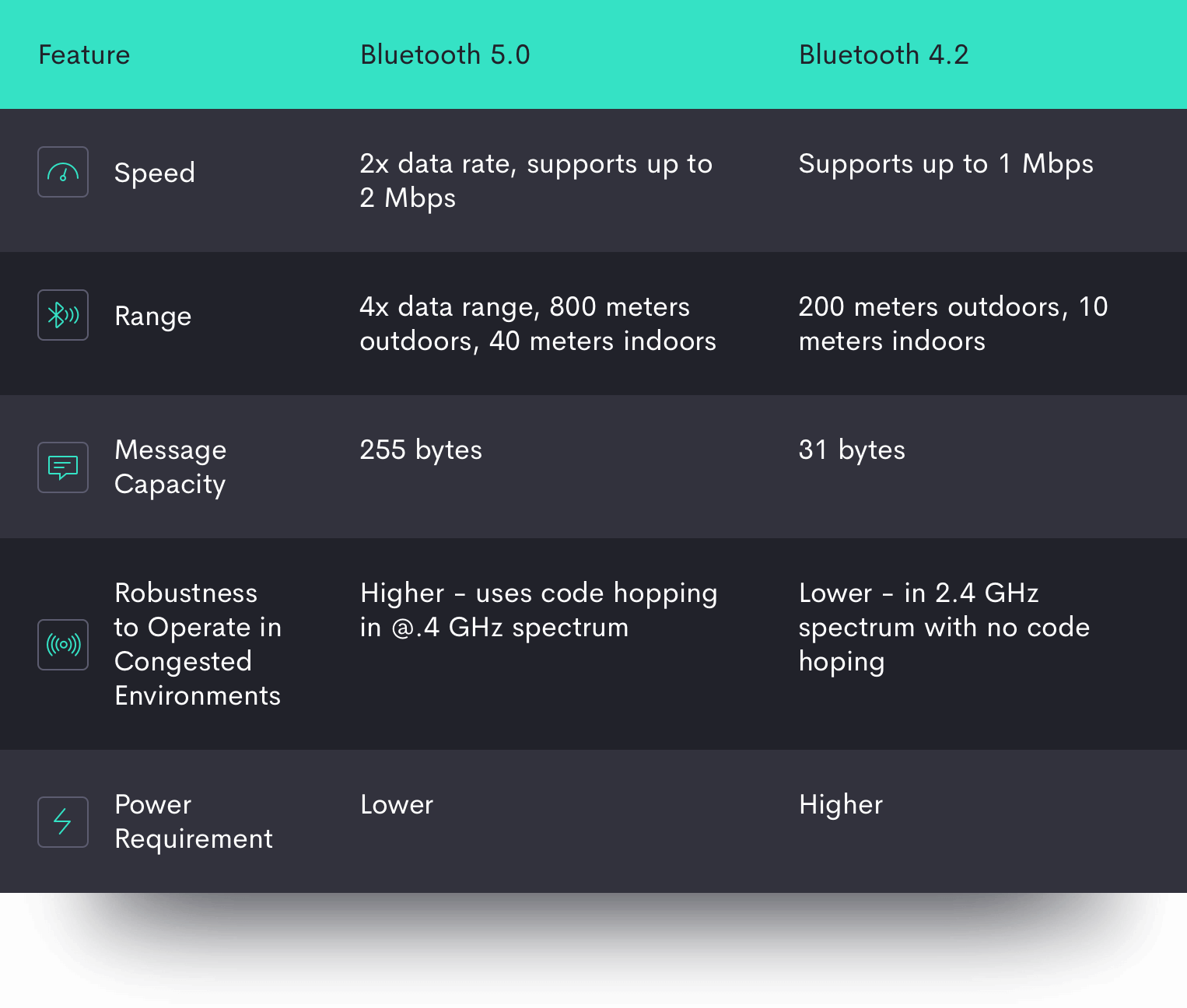 It’s important to highlight that not all smartphone models and OS variants that support Bluetooth 5.0 include all of the benefits of the new update, particularly on the Android side. These improvements are optional to varying degrees, so hardware manufacturers that support 5.0 may be missing one or more of these new features.

One important new feature in the Bluetooth 5.0 specification is a choice of 3 Physical Layers, or PHYs, which configures the physical parameters of the radiofrequency communications between devices; in essence, the PHY is the Bluetooth chipset. To run Bluetooth 5.0, the phone’s PHY must, at minimum, support LE 1M PHY, the chipset used in Bluetooth 4.0. However, there are two more advanced types of PHYs with better capabilities which do not have to be used in Bluetooth 5.0 smartphones.

The second type of PHY, the LE 2M PHY, is faster, and the LE Coded PHY provides about four times the range of Bluetooth 4.2 without increasing power usage. However, while most new smartphones on the market support either LE 2M PHY and LE Coded PHY, most do not support both.

A second new feature in Bluetooth 5.0 is the use of longer “advertising” packets. In this case, advertising refers to Bluetooth’s ability to broadcast its signal to identify itself to other Bluetooth devices. So-called Bluetooth “advertising” is essential so that the device can locate and link up with other devices. With a longer advertising packet, more information can be transmitted between the connecting devices, which serves to improve the user experience.

In short, three of the features available in Bluetooth 5 (LE 2M PHY, LE Coded PHY, and Extended Advertising) do not actually have to be supported for the device to be classified as Bluetooth 5.0.

Consequently, when a smartphone manufacturer says its hardware model supports Bluetooth 5.0, there may be limitations that prevent it from interfacing with other devices which have support for all of the new features of Bluetooth 5.0.

However, with any new iOS upgrade, there would be issues. We have heard reports on some issues related to Bluetooth connectivity by users when they update their iPhones to iOS 14. This article takes a deeper into the issues that arise with iOS 14.

Samsung Galaxy S7 was the first of Samsung’s flagship line of Galaxy smartphones to offer Bluetooth 4.2. The S8 was the first of the company’s Galaxy line of smartphones, as well as one of the first phones on the market, to offer Bluetooth 5.0. However, Samsung has, to date, been inconsistent in the implementation of Bluetooth 5.0 specification options in their hardware models. The Samsung Galaxy S9+ only offers some of the three primary 5.0 specification options, while the S10+ offers all three.

Bluetooth 5.0 and the Android OS

In addition to lack of hardware support, several older versions of the Android operating system do not offer full software compatibility with Bluetooth 5.0. At the present moment, Android versions 8 and above currently support both Bluetooth 4.2 and Bluetooth 5.0 (although not necessarily across all three domains).

Bluetooth 5.0 For Your Connected Device Solution

Given this information, when should you actually target Bluetooth 5.0 for your connected device solution?

There are two parts to answering this question:

For the first part, it’s worth noting that many applications don’t need the higher bandwidth, range, advertising, or more robust coexistence in a congested environment. For example, if you’re only transferring a small amount of data between a device and your smartphone when the application is in foreground mode (and close to the device), then you likely don’t need Bluetooth 5.0.

If, on the other hand, you frequently transfer large amounts of data (like waveform or image data) when the smartphone application is in background mode and/or the smartphone is far from the device, or when you are controlling a medical device via BLE from your smartphone in a congested environment, then Bluetooth 5.0 improvements are much more useful—and in some cases necessary—to make your connected device system safe and feasible.

For the second part, a simplified answer is that it depends on when your next product release is scheduled and what level of market coverage you’re looking for.

Ultimately, your strategy should take into account your need for Bluetooth 5.0 improvements, and when, where, and how much market share you need for the software you’re releasing. The recent data shows that, at least in the near term (e.g., Q4 2022), developing for Bluetooth 5.0 should be a top priority as its market share will only continue to increase.