I’ve been reading a lot of Asymco since John Gruber linked from Daring Fireball a few weeks ago. Great analysis illustrated with lots of graphs.

Take a look at this one, from Android’s Pursuit of the Biggest Loser: 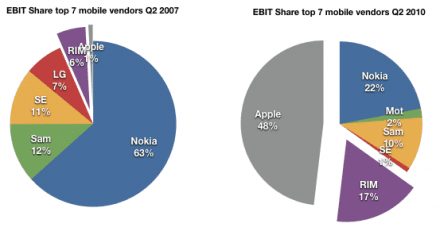 I thought these were great points:

Speed. This shift of profit occurred over an unprecedentedly short period of time. Three years is no more than two product cycles in the industry and it’s an order of magnitude faster than what happened historically to other industries.

Disruption is the diagnosis here. The incumbents were caught in the headlights. Disruptive innovation leads to asymmetric competition and this is what we just witnessed. History has shown that the shift of profits is usually the last stage of disruption and is usually irreversible because the change in business models cannot happen at the rate of change of profit transfer.

There are a couple of good points in the comments as well, in particular about HTC and about where value is created if all the components are commoditized.

The title is pretty dead on. Microsoft dropped the ball, and Apple, and to a lesser extent RIM have come in and disrupted the other players.

In Google’s business model, there’s a huge benefit to complimentary products and services to be commoditized, and they’ve come in and swooped up all of these suddenly desperate players who’ve seen their businesses commoditized.