Laptops are a strange, inefficient tradeoff between an iPhone’s portability and a desktop’s capabilities. They don’t satisfy either need extremely well, but they’re much closer to desktops than they are to iPhones. The usefulness and portability gap between a laptop and an iPhone is staggeringly vast … Ergonomics are awful unless you effectively turn them into desktops with stands and external peripherals. But they can do nearly any computing task that desktops can do, and they’re able to replace desktops for many people. One of Steve Jobs slides during the iPad announcement last week showed an iPhone, a MacBook, and a space in between with a question mark. Was there room for a third device between a laptop and an iPhone?

If it’s a small space, suitable for a few niche products like the Kindle, then the iPad hullabaloo is much ado about nothing. If the space is big and eats into laptop market share, then this becomes a major turning point in how we interact with computers.

Apple is betting that the space is big, and that the future of computing will look a lot more like the iPhone than the Laptop. Let’s think about what that means: If Apple’s tablet, like its smartphone, and its music player before that, becomes the preferred and dominant device of its kind, and that device starts displacing the preferred computing device for the current time (the laptop, which in turn replace the previous preferred computing device (the desktop computer), a market for which they currently only have 8.8% (although 91% of laptops above $1000) then they win really big. 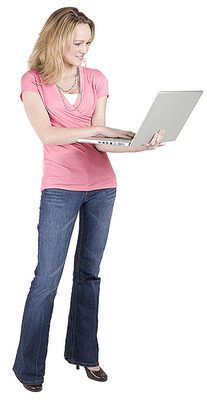 Why would you replace your laptop (with it’s bigger screen and it’s moderately comfortable keyboard) with a tablet?

To realistically use a laptop, you need a large surface, enough room in front of you, and preferably a seat. Otherwise, you look like this.

A seat on the subway or in economy class on a plane is too cramped and uncomfortable for most people. You need at least some time.

For the times when you need a keyboard – when you’re writing an email, or a document, or a presentation, or developing software – you can set your tablet up in a work environment, just like you do with your laptop – docked, or at least connected to a large display, a wireless keyboard and a wireless mouse. You can take the last two with you when you go home, or to a coffee shop, or your in laws house.

Those rare situations where you really need that full keyboard in that cramped setting without a work surface, you can either make do with the onscreen keyboard, or find yourself a flat work surface when you need a laptop. 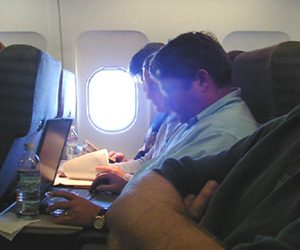 Of course, some people will not be able to do without even in those rare circumstances, like this fellow on a plane, or like those who cannot do without their blackberry, and those people will not switch (at least not right away.) The same way that many people bought desktops for a long time, and then eventually switched to laptops when the computing power difference and cost difference no longer outweighed the convenience factor.

But for the rest of the world (and I’m betting that’s a much larger audience,) having a multifunction, always connected, portable computing device that I can use like a desktop or in truly portable fashion will be clearly preferable.

At that point, you’ve introduced a serious disruption to the personal computing market. People who don’t buy your laptops but buy your iPhones and iPods, now will have another reason to buy a device from you, that’s a replacement for their current laptop (likely not a mac, but a windows box.) If that happens, Apple will have won not just the current battle, but the war with Microsoft and IBM that they fought and lost 40 years ago. If it happens, that’s the business story of our time.