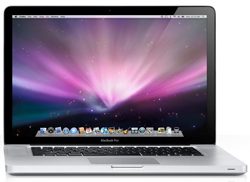 So I’m watching the big Apple notebook event and getting totally excited about the impressive new graphics capabilities. Finally, I’ll be able to get decent visuals on World of Warcraft on a Mac laptop. Then we get to the part about the new trackpads and my excitement wanes. Once again, Apple is opting for ultra-minimalist hardware and then using software to compensate (poorly) for that design choice.

We’ve got a new trackpad for notebooks. It’s a gorgeous, large, multitouch glass trackpad for notebooks. It’s 39 percent larger tracking area than before, it’s multi-touch for gestures, it’s glass for silky-smooth travel. And we’ve optimized the coefficient of friction on the glass, so it’s really beautiful. And the entire trackpad is the button. It gives you more area on the trackpad and keeps you from hunting for that button. You can get multi-button support from software. And we’ve added some new four-finger gestures that are really nice.

Four-finger gestures may be really nice, but I’d opt for two hardware buttons any day. Whether you’re playing video games or simply using productivity and development apps, you should be able to summon context menus without having to resort to arcane gestures. Apple’s obsession with scaling hardware down to its essence may result in beautiful products, but usability almost always suffers. Need some more examples?

My point – and I do have one – is that minimalism should be a means to an end; the end itself should be usability. Simplifying a device’s hardware does no good if it means forcing the user to think about how the software interface works. I’ll almost certainly purchase one of these notebooks – possibly several. But as with so many Apple products, I’ll curse softly nearly every time I use it. Apple’s products are the best thing going in the notebook market, but they could still be so much better.