In a lean startup, marketing is a process of discovery using fast feedback loops, just like customer development and agile development. Customer interviews and the process you use to get those initial interviews will give you some initial information and validation on your positioning (unique value proposition) and channels. But that’s only the beginning. You’ve got to test your messages and your channels because your assumptions on those are likely off target.

This lesson was brought home to me again on a project we recently launched:

A survey platform for the Peterson Group called SnapCAPP that can be used to gauge audience priorities across a series of attributes and relate those to their preferences among brands (such as advertisers, publications, web sites, political candidates, etc.). The business model is pretty straightforward – collect information on the audience and sell that to the brands.

The first application of the survey tool that we rolled out, Farmsurvey.com, is targeted towards farmers and farm publications.

Reaching farmers has proven to be a challenge. We assumed that farmers were not actively searching to fill out 20-page surveys on the web and that as a result, search advertising and SEO around the survey was not likely to result in great conversion statistics. We ran some tests on this, with prizes like an iPod Touch and cash (cash was king) and confirmed our assumptions. We hypothesized that channels that targeted more passive audiences would be better, so we tried email, banner ads on agricultural publications, classified ads on Craigslist and other sites, posting in various forums, and even twitter. Of these, email performed the best, but even that did not result in a cost per survey respondent that would make the project economically viable.

My brother (and business partner) Dietrich had suggested that we try Facebook, but I was very skeptical. Why would Facebook work for farmers customers when channels directly targeted at farmers didn’t? Thanks to my brother’s insistence, we tried it anyway, and lo and behold, Facebook converted extremely well. In fact, it proved to be by far the lowest cost and best scaling channel we had – less than 10% of the cost of the next best channel. This definitely improved our project’s viability.

We think it’s because Facebook lends itself well to targeting based on lifestyle and interest areas, and farming is as much a way of life as an occupation. Farmers on Facebook identify themselves as farmers (unlike, say, small business owners), join farming related groups and causes, and are fans of farming related pages. You can target people based on these and other demographic characteristics. This turns out to work really well for farmers.

We did a fair bit of testing of ads and landing pages to different demographics on Facebook. Here are a few samples: 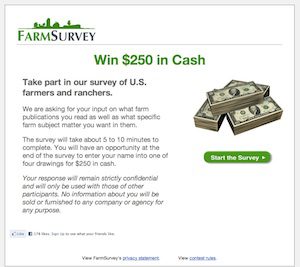 We were able to get great data on various subgroups such as dairy, corn, soybeans, etc. One very friendly looking cow ended up being the best overall performer, except with Dairy Farmers, where a milking device ended up outperforming everything. One area where we had little success: Hog farmers. We just couldn’t catch very many, and we don’t know why.

We’re now trying a few other things on Facebook – including promoting the FarmSurvey fan page. We are using content from our survey results, as well as other content relevant to farmers to attract fans. Here’s an example message:

Recurring theme: what to do when you retire from #farming — selling, putting land in conservation trusts, estate planning, etc.

Getting people to like your page has a number of benefits, including the fact that you show up on many of your fans feeds. This has resulted in another low-cost source of completed surveys. 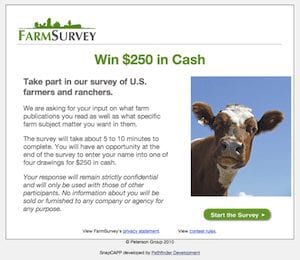 For the advertisers, we found another channel worked very well: Twitter. We happened on this by accident. As we were testing twitter as a channel for farmers, we got an inquiry from a major brand based on these tweets. We thought this was intriguing. We started participating in these threads using some findings from the data we had collected, and found ourselves getting inquiries from the top brands in the industry as a result. It is currently the best source of leads for FarmSurvey. We think that because Farm Survey’s potential customers are primarily advertisers that are interested in how farmers and others relate to their brand, many are watching their brands and farm related threads and hashtags on twitter.

Neither Facebook now Twitter were our first guesses for best channel for each of these groups. One more reason why you should do customer interviews and do a lot of testing.

Lesson Learned: Don’t let your marketing assumptions get in the way. The best channels may surprise you, so go out and test them.